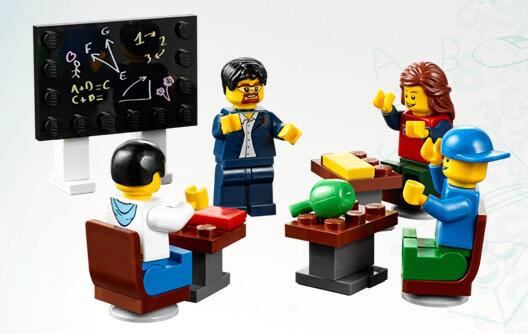 By 2019 the population of LEGO mini-figures will overtake humans.

In 2015 LEGO was the world’s most profitable toy brand, achieving its tenth consecutive year of sales growth – looking at the bedrooms of our three boys I sometimes wonder whether it’s entirely down to us! Back in 2003 the company was on the brink of bankruptcy, so how did CEO Jᴓrgan Vig Knudstorp (JVK) transform performance at LEGO?

As always when your own beliefs are re-enforced by someone older and wiser than you, I was heartened to discover that culture was at the heart of his approach. JVK describes culture as the “execution mechanism” by which he delivers strategy. Four themes come through strongly in the success story: reconnecting with customers, purpose and values, fostering relationships and role-modelling from the top.

1. Reconnecting with customers
JVK knew that there was waste in the operation and that costs needed to be cut, but instead of rushing into a ‘slash and burn’ exercise as is so often the case, he headed to a BrickFest convention to meet his customers face:face and listen to their experience of LEGO. The sheer, simple pleasure of constructing something from their imagination was clear. He discovered that Google employees saw LEGO as instrumental in shaping their young minds, teaching them how to think systematically and creatively and he found research to back up the founding philosophy that children can learn through play. Feeling under-threat from the rapid growth in video games the organisation had lost its way, instead of focusing on doing more of what their customers wanted, they’d taken their attention to clothing ranges and theme parks. JVK now has three “moments of truth” which guide every product decision:

1. When it’s advertised, does it make a child say ‘I want this’?
2. Once he opens the box, does it make him go ‘I want more of this’?
3. One month later, does he come back to the toy, rebuild it and still play with it? Or does he put it on the shelf and forget about it?

The customer and the product is now ever-present across the sites. New products are designed in collaboration with customer focus groups and the product itself is everywhere, from signs in the canteen to personalised mini-figures used instead of business cards.
2. Reconnecting with purpose and values
At the same time as understanding what customers really want and establishing a strategy to give this to them efficiently, JVK recognised the need to create a culture that would deliver and sustain the new direction. He describes this process as a “philosophical renewal”.
LEGO’s mission is to ‘inspire and develop the builders of tomorrow’ underpinned by the fundamental belief that ‘good quality play enriches a child’s life and lays the foundation for later life’.

As well as refocusing on the mission, 6 core values were defined: Creativity, Imagination, Fun, Learning, Quality and Care. A people promise clearly sets out ‘the deal’ that LEGO and its employees make with each other:

• Purpose Driven
Experience the pride, commitment and shared sense of responsibility to deliver our mission

• Action Ability
Be accountable, deliver what you promise and unlock your talent in the best interest of the company

Watching the Secret Life of LEGO on Channel 4 gives insight into how these values and commitments are hard-wired through the day-to-day experience of working in the organisation, regardless of which of the international hubs you work in. Every action is in service of delivering LEGO’s mission. Take Quality for example, the attention to detail is such that if a brick is 4/1000th millimetre out then it is rejected because they don’t want to risk a customer not being able to build. Extra pieces are put into each packet in case one gets lost, teams work through the night to solve construction challenges with new models, employees wear t-shirts emblazoned with “Only the Best is Good Enough” – all of this seemingly because they buy into LEGO’s mission, not because someone is telling them to do so.

3.   Foster relationships
Listening to the way people describe working at LEGO one word comes up time and again: “family”. The core values are woven into every touch point with people. The recruitment process for designers assesses not just their Creativity and Imagination but also how they’ll fit in with the team – whether they are Fun and Caring. LEGO has an advantage over many businesses in that working there is a dream job for many people (my eldest included!), and people really want to stay working there so they foster relationships to ensure it remains a great place to work, with open minded, friendly people who enjoy working together in teams. If they don’t get the right people first time around they go again – they don’t settle for second best.

People who work at LEGO want to work to a greater purpose than making money. They feel pride for what they do, they feel part of something. Training in the call centre in the run up to peak trading focuses on the emotions customers will be feeling at Christmas and the critical role LEGO plays in putting smile on child’s face at this time. A multi-lingual call centre team with at least 14 first languages between them see empathising with the customer as key to their role. When there’s a problem, they can’t change the product but they can show understanding for their situation.

Fostering relationships and the health of the family runs from the moment a new recruit is met by his team at the airport, through social activities like the Hub Pub Club in London, a “no-sugar” policy in vending machines and colour-coded healthy eating in the canteen. The Rules of Engagement posted up in London’s activity hub sum up this balance between freedom and social conscience: “Work in whatever way makes you most effective providing it does not impact the effectiveness of others”

Hear from JVK at http://www.lego.com/en-gb/careers/our-culture